How J. A. Jack & Sons found an easy route to behavioral change

J. A. Jack & Sons has trucks that travel into Oregon and pay Weight-Mile Tax in that state, and it wanted a way to modernize its WMT reporting. By automating the process, the company hoped to free up administrative time, and eliminate human error and the stress caused by leaving reporting till the end of each month.

The company was also looking for a better method to manage fuel use. It has an underground storage tank on site and an aging fuel system, with drivers required to punch their fuel figures into the system, and no accurate method of validating the figures or tracking fuel economy.

J. A. Jack implemented the EROAD system to automate Weight Mile Tax reporting. After a few months, it started using EROAD Leaderboard, Idle and Driver Insight reports, printing out the reports and displaying them on a wall where they were visible to all of its drivers.

Leaderboard reports rank drivers within the company based on key metrics such as harsh braking, speeding and idle events and shows improvement over time. It also compares the drivers to the rest of the EROAD driver population.

J. A. Jack General Manager, Michael Harford, said the company’s intention behind the use Leaderboard wasn’t related to disciplinary action, but simply to make staff aware of how they were driving and improve driving behavior over all.

“I said to them, ‘We just want you to be aware. When your truck is running and you’re not in it for longer than 20 minutes I want you to know,’” he said.

Automating WMT has made it super easy, according to Michael, with the result that the company’s DOT admin now has more time to accomplish other things.

Posting reports has resulted in a significant reduction in speeding and idling events, along with a drop in costs.

EROAD fleet summary reports have shown a 24% decrease in idle time over three months, even accounting for the fact that its trucks operated 167 more hours during the third month than the first.

An average truck burns about 1 gallon of fuel per hour at idle. What the company has saved in fuel costs through decreased idle times has delivered instant ROI. Average fuel economy over that time was up 4.5% and Michael said when fuel prices rise, the company will be ready.

When the drivers started using Leaderboard, most claimed they didn’t speed at all. Over three months, with drivers checking the board every day to see how they’re doing, speeding events have dropped significantly.

“Our speed has dropped, our braking events have dropped and everyone is aware because all the drivers look at the board now to see how they’re doing and they point it out to us,” Michael said. “The drivers are competing not with each other, but with themselves to get better.”

"EROAD has been one of the best companies we’ve ever dealt with. The technical support has been tremendous. The customer service is super awesome. We were able to do our own installation, and were offered help but didn’t need it. Our account manager is always checking in on us and keeping us up to date and we get regular emails telling us about new features. The best thing we ever did for our fleet was install EROAD."

J. A. Jack & Sons, Inc. ships bulk and sacked ground limestone by rail and truck throughout the Northwest.

For more information about the EROAD solution, please fill in the form below or call 855-503 7623 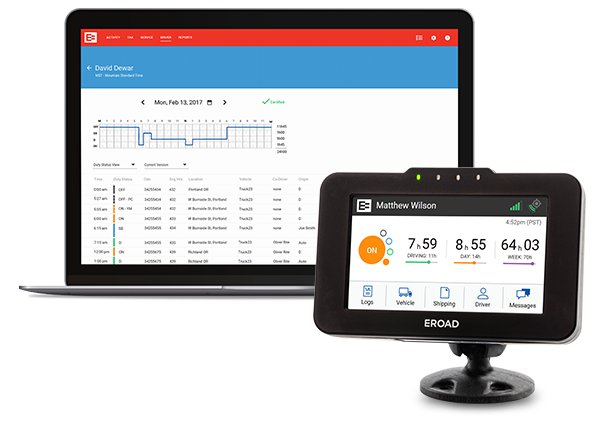 Confidence in every mile

Our customers rely on EROAD to ensure FMCSA compliance with the ELD mandate and on our platform to deliver the accurate and reliable data that helps them run a faster, safer and more successful business.

Start your journey with EROAD today.