Half-year to September 30, 2016
EROAD Limited (EROAD) (NZX:ERD) reports continued solid revenue growth with financial performance in line with expectations, as well as refinement of its strategy and business plans in North America.

Chairman of the Board Michael Bushby said the strong sales and revenue performance of the New Zealand business, combined with a return to outsourcing of funding for customer finance, previously funded from working capital, meant the Board was comfortable the company could fund the significant current North American opportunity. He noted that EROAD’s New Zealand/Australia business generated sufficient cash flows from operations to fund all of EROAD’s US operating losses, all EROAD’s corporate costs and the majority of EROAD’s R&D, such that cash utilised in the six months to fund these activities totalled $0.25 million per month.

“As we signalled at our annual meeting in August 2016, we commissioned robust, independent analysis from external partners, including a ‘Big 4’ firm, to test and guide our US strategy,” said Mr Bushby.

“Business planning from this work is continuing, but a key aspect of the analysis is a validation of our North American opportunity, as well as specific insights to help focus and guide our business plan,” he said.

“The result of this work, combined with the ongoing refinements we are making to our North American business, give us confidence that our continued, considered investment in North America, utilising cash generated from our New Zealand business as well as customer finance funding, is the prudent approach,” said Mr Bushby.

“Our opportunities in North America as well as New Zealand remain considerable,” he said, “and we are pleased with the continued strong growth achieved by the team.”

Chief Executive Steven Newman says that alongside continued growth driven by electronic Road User Charges (eRUC) services, the company was excited by opportunities in the health and safety space as fleet owners and managers recognised their responsibilities to drivers and road users in ensuring the safety of their supply chains.

Heavy transport fleets continue to move from paper-based RUC to eRUC and EROAD is winning a dominant share of this move from paper and mechanical systems to electronic systems. EROAD has collected $1.2 billion in RUC since 2009, and is now collecting 36% of New Zealand’s total annualised Heavy Vehicle RUC, up from 31% at September 2015.

In addition to further growth in eRUC, the New Zealand market opportunity has expanded considerably with changes to Health and Safety regulations, requiring companies to better-supervise hazardous work places, including driving. Alongside growth in the heavy vehicle sector, EROAD’s record sales reflected higher sales to light vehicles and other fleets to support customers’ health and safety compliance obligations.

Mr Newman said that a feature of the six months under review was growth in enterprise sales. This included an agreement with Downer New Zealand, one of New Zealand’s largest fleet operators, which has a strong focus on health and safety.

“Our New Zealand business is a well-established part of the transport ecosystem and is enabling continued innovation in eRUC and compliance services, as well as fleet management, insurance and driver behaviour. Earlier this month, the Safe Driving Rewards Programme, a collaboration between EROAD and NZI/Lumley won the ‘Innovation of the Year’ category at the New Zealand Insurance Industry awards,” said Mr Newman.

“The profitable, cash-generating performance of our New Zealand business provides the platform for our investment in North America. That investment is one that we believe will generate significant returns in the future. At the same time, we remain very focused on future growth in New Zealand and on protecting and nurturing what is already a strong and profitable business in its own right.”

In July, the American Trucking Associations (ATA) accepted EROAD into its Featured Product Program as a Corporate Partner. This brings EROAD onto the national scene with the endorsement of the USA’s largest national trade association for the transport industry, and provides a vehicle to deliver thought leadership that sets it apart from its competitors, in addition to a highly targeted audience for lead generation activities.

As indicated at the company’s annual meeting in August 2016, the company sought independent analysis from two external partners, including a ‘Big 4’ firm, to support its business planning in the US. This work began in the six months under review, and was recently provided to the company.

Mr Newman said the work would assist EROAD’s business planning in North America, including refining its sales and marketing. Two key aspects to this work were a validating and sizing of EROAD’s opportunity, as well as market research to support the refinement of its offer to its markets in North America.

A feature of the six months under review has been market uncertainty relating to the implementation of MAP 21 regulations requiring heavy vehicles to have an electronic logging device (ELD), a federal law whose rules were published in December 2015. Transport operators considering electronic systems for their fleets have been waiting to see whether and when these rules will be enforced. On 31 October, US courts threw out an application challenging the legitimacy of ELD regulations, confirming that these regulations will come into effect as intended in December 2017.

EROAD has continued its research and development effort to complete a compliant and independently-tested ELD by March 2017 to complement its offer in the US which already includes the country’s first electronic Weight Mile Tax (eWMT) service for travel in or through Oregon state, and electronic IFTA (International Fuel Tax Agreement) recording, as well as fleet management and driver services.

Mr Newman said EROAD was very focused on lifting its performance in the North American market, to create a high-growth, self-sustaining business to match its New Zealand operation.

“Our immediate focus is on accessing the significant market opportunity that exists to enable customers to comply with the ELD regulations which come into effect in December 2017 in the US,” he said. “We will be running very hard to ensure we capture our share by the December 2017 deadline.”

He said that while the company had further work to do on its sales and marketing capability, it was pleasing that customer response to the quality of its technology platform and its services remained very positive. The California Road Charge pilot, which launched in July, is progressing well, with key participants becoming champions of the EROAD system.

Outlook for full year to March 2017

EROAD will continue to focus on protecting and nurturing its New Zealand business, as well as investing in growing its North American business towards break even.

Growth in the New Zealand business is anticipated to remain strong while North American growth is likely to remain modest until market acceptance of ELD compliance. This assumes no further regulatory challenge, ELDs become widely available and operators begin seeking a service provider in earnest. EROAD’s R&D expenditure remains focused on completing an approved ELD by March 2017, to be in a good position to compete in the market for ELD services. EROAD believes that the addition of an ELD offering to the company’s full suite of existing weight mileage tax, IFTA, HOS (hours of service), driver safety and services will deliver a compelling customer proposition in the North American market.

Switching away from working capital to outsourcing of funding for customer finance, combined with returns from the New Zealand business, provides the company with financial flexibility to execute its plans. Outsourcing of funding for customer finance is a cash management approach EROAD has previously employed successfully during the early stages of the development of the New Zealand business, and was always envisaged as being the long-term solution to providing EROAD with customer finance options as the business grew.

Consistent with its dividend policy, EROAD does not intend to pay an interim dividend for the year 31 March 2017.

About EROAD
EROAD is a fully integrated technology, tolling and services provider. EROAD’s goal is to offer flexible and powerful solutions based on its innovative technology to assist in the creation of a transport sector that is responsive to the evolving needs of business, government and the wider community.

The EROAD platform consists of a secure electronic distance recorder (Ehubo), integrated with mobile applications, and an online bank-grade payment gateway and services portal. It undertakes design and manufacture of its in-vehicle hardware, as well as software development, from its headquarters in Auckland, New Zealand.

For a detailed description of EROAD’s business, and terms including Total Contracted Units, Future Contracted Income and Retention Rate, which are non GAAP measures used by EROAD to manage the business, please refer to the final page of the November 2016 Half Year 17 Presentation. 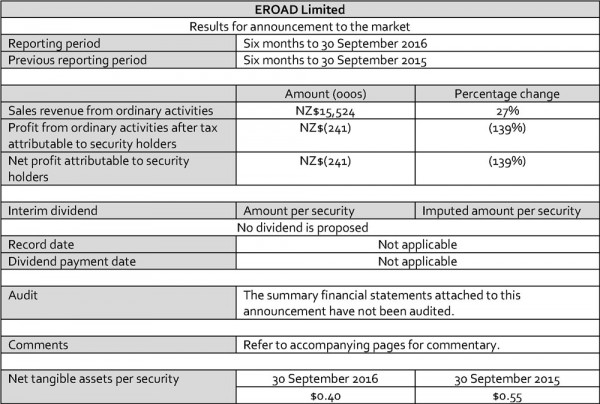 Published in News
Prev View All Next